We began apartment hunting this week.   Almost everyone in Medellin lives in apartamentos and they range greatly in size, amenities and height.  They also come unfurnished – like so unfurnished you have to bring your own refrigerator.  We planned to find an AirBnB for a few months when we return in (hopefully) February but then found it would be simpler to just jump into a small apartment.

The first thing we did this week was scout out places for appliances and must-come-first furniture.  Falabella, Jumbo and Exito are have appliances, tables, chairs and mattresses.  Most deliver for free!

Then we started the online search just to narrow down the neighborhood.  There are literally thousands of apartments for rent. From rooms to rent, to studio, to penthouses with gorgeous views.  Since we aren’t bringing our furniture fro Panama until at least 2019, we think  a smaller place would be a good place to begin.

We have already found that ‘working’ with a realtor is an impossible task.  I don’t know how they earn a living.  Multiple agencies have told us that they don’t have any rental listings when we’ve seen several online.  One guy told us the the paperwork is difficult.  Isn’t that kind of the job a realtor does?  So we decided to try on our own.

This idea would not be advisable for people who have limited Spanish but we did great!.  We actually had a conversation with a woman on the street today.  Good thing as most people do not speak English at all.

We found a location that we thought we would like and started banging on doors.  All the properties we looked at have 24 hour guys in the lobby.  Two of them yesterday just gave us the keys to the empty units and let us take a look.  One was just weird but the other was gorgeous, but it was far from public transportation.  It also was huge – 3 bedrooms plus maids quarters and 5 bathrooms.  The patio was like another room.

Today we took a look  at apartment buildings closer to the Metro.  The AirBnB that we are at now is in a good location but on a very noisy street.  We hit the inner roads and found another 24 hour guard that gave us the scoop on a pretty place overlooking a park.  He didn’t have the keys but gave us the owner’s name and number = no realtor!  Go us!!

We also got on a random bus today to see the outskirts of Envigado.  It was a waste of 2 hours but it felt like we were climbing to the top of the world.  We are pretty close to the Andes Mountains.  Nice area but I wouldn’t want to live so far away.

Tomorrow we will call the contacts and see what we can accomplish.  We still have 2 months here so we aren’t in an stress-filled jam.

I also found a Zumba spot this week.  It’s at the Museo de Castillo, which is an old estate that was deeded to the city. 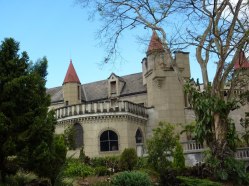 There’s a nice group of rooms and a small restaurant on site.  Suzy is the instructor and I can Zumba three times a week.  Cab fare from our place is about $2.  With the amount of walking we’ve been doing on some strenuous hills, we should both be skinny.

One of the local grocery stores offers cooking classes so David will be signing up for a few.  The markets are full of fruits and vegetables, many that I have missed while living in Panama.  There are fresh apricots, tangerines and peaches in the markets now.

So far we are loving the big city.  It’s so clean, there are a million restaurants there are theaters and museums, the people are fantastic and a cab will take you almost anywhere you want to go for 2 bucks.

6 thoughts on “First Week in Medellin”