Several months ago, my daughter caught a real good airfare rate to Africa – $406 round trip JFK to Nairobi.  Who could take a pass on that?   Especially when it’s about $600 just to fly 2.5 hours from PTY to Miami.  Bargain!

We’ve been to Kenya before so I figured that I could plan our entire trip.  The airfare was cheap but it included a short layover in Abu Dhabi and we chose to get a room to relax, take a shower and get some sleep.  Unfortunately, the layover was from late at night to early check-in in the morning so no time for site-seeing.  We only saw enough to make us want to return. 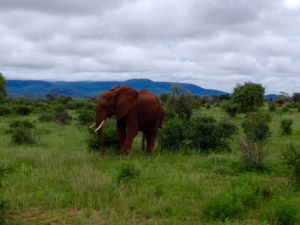 I arranged a 9 day safari.  We went to Samburu, Lake Nakuru, Lake Naivasha, Masai Mara and Amboseli.  We saw lots of the Big 5, some very close to our vehicle.  We also saw more common animals, jackals, hyenas. crocodiles, gazelles, and warthogs.

The elephants in Samburu are a reddish-brown, unlike the ones further south, which are typical grey.  We wanted to get a picture of elephants wit Mt. Kilimanjaro in the background.  Lucky for us, the elephants cooperated. 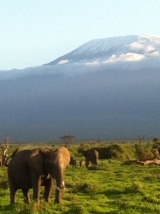 Our safari guide, Livingstone,  was great.  He studied animal prints to follow in the vehicle.  Because of this, we saw multiple lions, giraffes and more elephants.  The elephants were outside our patio that overlooked the river.

Kelly had to return to go back to work 😦 after the safari.  We dropped her at NBO and we headed to the domestic terminal for our flight to spend a week in Mombasa.  It was not what I expected.

We were in Kenya about 13 years ago or so.  The improvements to their infrastructure was nothing short of amazing.  On our first visit, there was nothing but dirt roads.  Today, all but the ones in the parks are paved.  Internet is still in its infancy but the city of Nairobi is now modern and much safer.  Gone are the days when it was called NaiRobbery.  I expected Mombasa to have kept up.  wrong.  Mombasa is the 2nd largest port town in all of Africa.  The amount of money that this port is worth is probably close to the net value of a small country.  The poverty we saw is shameful.  Their roads are terrible, the amount of garbage everywhere is disgusting, kids begging instead of in school – certainly not what anyone would expect from one of the oldest ports in the world.

So these mature, yet oblivious, travelers flew to Mombasa for our final week in Africa.  Our 45 minute flight was 3 hours late so the driver took us to the resort in the dark.  The next morning we saw that Mombasa is far from modern. 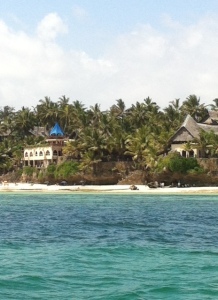 We chose Mombasa so we could go scuba diving and the dive shop was right in the resort.  The shop and crew were great. The shop itself is carved into the coral shelf under the hotel. The dive was very nice.  We went into town the next day.  Not much to see but boy was it hot, humid and dusty.

We returned to Nairobi to see the David Sheldrick Elephant Sanctuary.  They take in orphaned baby elephants and raise them until they are about 3 and can be returned to the savanna.  Not too far away is the Giraffe Center which allows you to feed giraffes.  Both are awesome and a highlight of our trip.

The trip back to Florida was long.  Five hours to Abu Dhabi, 13:40 to JFK and another 3 to Fort Lauderdale, along with over seventeen hours of layovers.  We shopped in Fort Lauderdale – Lowe’s, Home Depot and Publix are high on the sites to see) and picked up our Amazon orders and began the trip home.  Finally, now we are home in Boquete.  The dogs and cats were so happy to see us.  Even the neighborhood dogs were anxious to see us and get some loving.  The unpacking is finished and the laundry is done.  No matter how much fun a vacation is, it’s always great to be home.  The next trip is already planned for January!!

On a side note, we flew on Etihad, a Middle Eastern airline based in Abu Dhabi, United Arab Eremites.  While watching where the airplane was during the flight, we saw we flew over some war torn countries.  We also noticed when we flew south, we detoured completely around Yemen.  Obviously, there’s danger in this area, even at 37,000 feet. 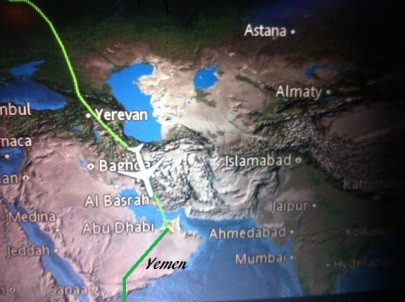 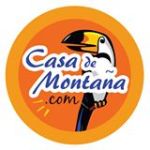 A New Life in David, Panama

Blog about our adventures as world travelers and expats living in Colombia.

Not quite the handy kitchen

The All Smiles Lifestyle

A Collection of Musings

A funny outlook on everyday issues

Life Out of the Box
Panamajama

Photos, wildlife and experiences from my time in Panama

A Girl, a Guy and Dos Gatos Living in Panama

Kris's blog, about retirement in Panama, and other various adventures